The shadows reveal a secret!

This posting was a long time in the making and it started over 100 years ago.
It is dedicated  to Sidney Wilkens, Grandson of Sidney Johnson one of the surveyors who worked on putting the railway through Agawa Canyon.

I met Sid a number of years  ago after I had just finished my fall trip down the Agawa when he and his wife Barb gave me a ride up to Frater Station where my vehicle was parked.

It is during this short ride we became friends and I learned of his Grandfather and how Sidney had come to the Canyon in the 30's with him.

At the time I was unable to identify where Sid had stayed.  Part of the problem was when looking for a waterfall as an identifier in the Canyon, where do you start, there are literary hundreds in a small geographic area, many of which are un-named.

Another problem was the forest had changed, where back in the day the vistas in the Canyon were clear, now much of the forest has re-grown and matured changing the look.  There is then whether it was a wet or dry season, the falls can look very different.

This mystery remained for a few years, even the journals as interesting as they were of Sidney Johnson and other surveyors that are stored at the Sault Ste. Marie Library gave no real clues since they are basicly work related notes.  I imagine to a surveyor historian they would be absolutley fasinating and they would be able to gleam a lot more information out of them than me.

Enter at this point another friendship developed from my love of the Canyon.  This one with Sue & and Jim Waddington authors of "In the Footsteps of the Group of Seven" whose life long passion of locating Group of Seven painting locations brought us together.

The Waddington's shared with me a Group of Seven painting from from a private collection, from the period of their Box Car trips to the Canyon, it sort of matched some of the waterfalls I had seen but could not place the location.  But once showing Sid, he new exactly which falls it was and I confirmed it the location in the summer that year, but the photo conditions were very poor.

Last fall the photo conditions were fantastic! so when I finished my annual trip down the Agawa my wife and I went up to get better images of this falls, and even this side trip was happenstance, only because our truck broke down and we had some extra days to do some extra exploring did we get this chance.

One of the things I have learned over the years coming up here, under the right conditions secrets and history will be revealed to you and sometimes you just have to be lucky.

I was familiar with the old station north of Frater not only because of the historical logging records but some of the old buildings that use to be there when I first started going up to the Canyon.  We were walking the trail in at the top of the old station, we noticed something that did look natural. 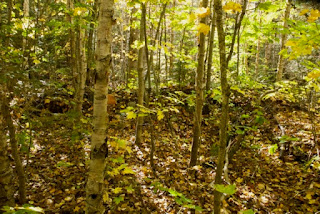 What it was was the log foundation outline of a structure they used for their canvas Bakers tents.  Both the loggers, the surveyors and construction crews would use these for their accommodations.
The yellow lines are the outlines of the logs, the orange hash marks are the inside  of the shelter and is un-naturally flat for the area. I have seen images of these shelters before but had never found/seen them for real before.  This is an  exposed log of one. 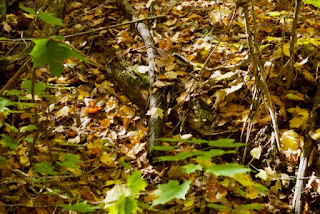 The construction of these shelters was very similar to this link.

Which brings us to this year.  One of the goals this trip was to see if I could find any evidence that Sidney Johnson and the surveyor crews camped here.

Lets look at the timeline here, we know Sidney Johnson was here in 1901 by the date on his sketches and paintings, we also have his surveying journals (at the Sault Library)
In 1901 the tracks were not yet in this part of the canyon.
I know from talking to Sidney Wilkens and his story that his Grandfather almost starving in here and was forced to eat used coffee grounds as they retreated camp to camp to try and get out alive.
After spending a few weeks winter camping in the canyon I can tell you just how tough it is to get around in here, the weather can be absolutely brutal and as for hunting or wildlife, there is not a lot in here during the winter.
Even though they did meet up with their First Nations supply person and they were very upset at the late supplies, sometimes it was just too dangerous to move with the gear they had at the time.
This is not an easy area to travel through at the best of times.

Let us also look at the work ethics and environment of the time.  For one the boss is not going to let you walk a few hours to get to the next sections you are going to survey.  Your "office" is going to be close so you get the most work done in the shortest period of time.  In the canyon there are few good campsites.  This site is really the only reasonable site between what we now know as Canyon Station and Eton.

Besides the really long hours we know that they worked at this time period, Sidney Johnson would not have the time to capture in paintings and sketches the beauty of the area in what little free time he would have had.

So his camp had to be very close to his drawings.

Which brings us to this year.  As mentioned above lighting, plant growth and other conditions can make for finding and seeing things "different." I have seen various old cans, parts of rusted tools and metal since 85, I knew it was a very old established campsite, but nothing that was a solid lead to who actually camped here.  If you don't know what to look for it can be tough.
We know the Group of Seven was here on their Box car trips as there are numerous painting sites in the area, but they had their Box car at Canyon Station, but they could have had a shore lunch here.
We know that through early post cards  (1920's) that photographers were there (I have 2 in perfect condition)
We know George Agnew Reid (another famous painter) was here in the 30's so it is possible that Sidney Wilkens met him when he was here in the 30's

Which brings us to this years special moment, and yes it really is humorous on how the secrets of the canyon are "Exposed"  😊

In this 2014 pic, I brought in a "Thunder box " to help keep the campsite contained and clean.
Please note the plant growth in front of the box. 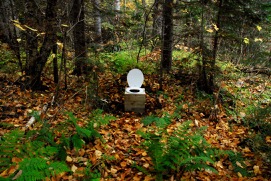 September 2017, over 100 years since Sidney Johnson painted and worked here.
I am "sitting" here contemplating life, 😎 the light is flat, the plant growth has died off at bit and I see this.  I say HOLY "STUFF"! 😇  All these year the evidence was right there proving if you don't know what you are looking for, you are not going to find it.  I can not explain the reason the background is overly foggy and blurred, (I was sitting very still)  but I am going with the spirits of those who passed here before. 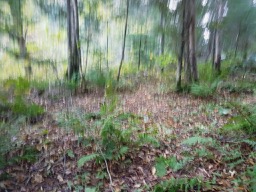 The yellow line is the log rectangle that would be the outer frame.
The orange is the flat, living area (and is unusually flat for this area) 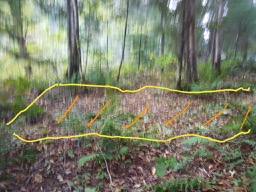 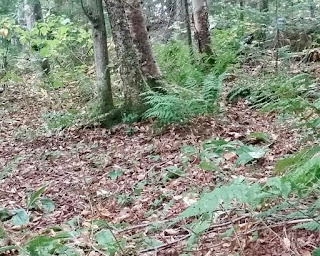 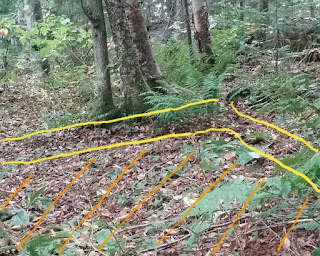 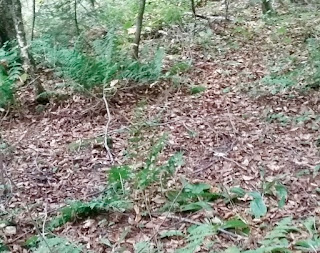 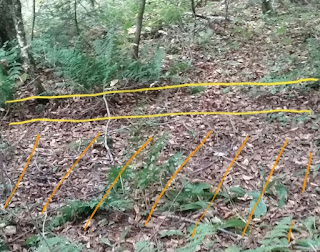 Which brings just how close we are to the Water colour painting site. 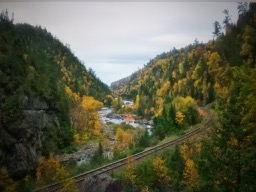 A- is the camp site.
B- is where Sidney Johnson would have painted from. 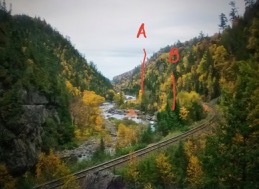 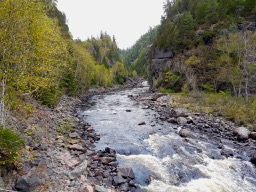 I really had to smile after this, so many things had to come together to actually be able to see this.
I knew I was far from the first to visit this area, but I am really happy that the Canyon continues to shows me it's secrets.
Could it have been a loggers camp? I am sure they had shore lunches here to. But logging was done through here well after this and the logs frame had turned back to the forest much more than the one just north of Frater except for the "bumps) in the ground.

I am just another traveller through the area who has found a special place, and it is special!

Thank you Sidney Wilkens for sharing some of your storey, and for inspiring me to follow these shadows.

The campsite that I have used for years, just metres away from the other site. 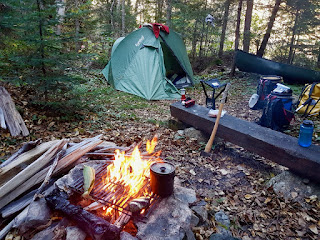