The bucket list, most know the movie, and most people have such a list of things to do or places to go.

I have been paddling for almost 50 years now and have done and seen some amazing things on the water.  I have won National titles in both whitewater and sprint canoeing.  I have trained, competed against, paddled with and have been friends with the best in the world both racing and recreational paddlers.

I have paddled many great rivers and waters around the world.  I have paddled some great first descents and rapids that are on many peoples list such as the Skookumchuck  Narrows in BC. And have paddled among huge icebergs in Newfoundland/Labrador.

There are many places I would like to go, but there is one that has been on the “list” for a long time and this will shock a lot of people that know “paddling” me.

We take you back to 1976, fastest in the Country in Downriver racing and most of my paddling is leaning to the “big” side of the scale.
We were traveling to the Nationals in Alberta when just to the west of Marathon Ontario, Highway 17, the Trans Canada makes a fairly sharp turn to the west around a small Boreal lake, nestled into a beautiful mountain setting.  The threatening clouds and darkening skies added to the depth and beauty of this lake.
Right then and there, I said I had to paddle this lake!
I have been to Northern Ontario many times since then but had not been able to stop and paddle here for a variety of reasons.
So this year I knew we where going up to Northern Ontario for two weeks at the end of July so the plan was to definitely go and paddle this pretty little Boreal lake named “Wolf Camp Lake” on the maps.
Not much has changed on this lake from when I first saw it except there is now a microwave tower on top of the big hill at the north end.  There is a little dirt road that follows the east shore but you don’t really see it from the lake.

Access is really easy as there is a turn off and parking area right beside the lake when you get off the highway and there is little sign that it gets used very much and there are no camps or cottages on the lake.

So for 39 years this lake has been in the back of my mind, that I should paddle it, why? I don’t know, but I will Share with you what I found.

Once we were ready to paddle and the boat was off and on the edge of the lake we gave a gift of tobacco to Mother Earth and the Lake. 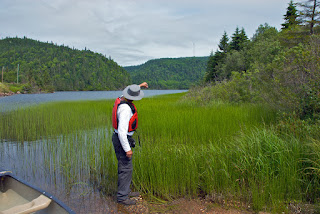 My paddling roots run very deep in Northern Ontario, my Father worked on the Algoma Central railway after WWII and was partnered with a First Nations member who taught him paddle and bush skills, which has led to my life long love affair with paddling, so this gesture was more than appropriate.

As we move through the reeds to open water an Eagle circled overhead and cried out….  Very cool indeed. 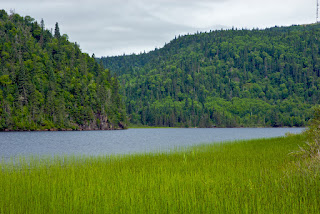 My wife Anne joined me for this pilgrimage, since I have been talking about this lake since we took the kids up for the Sault – Thunderbay loop 20 years ago. 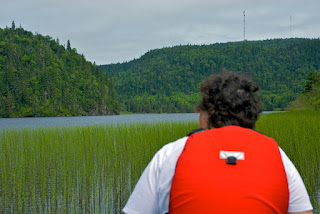 We paddled along the east shore heading north, there was a small little island and the shoreline rises gently for a short distance then raised very steeply helping give that lake in the mountains effect. 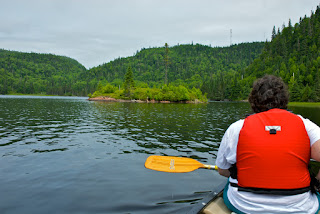 There was a nice wind blowing, not too strong, but enough to keep the bugs at bay as we slowly made our way along the shore.  When we got to the north shore there was a tiny lagoon with a small stream flowing in and we were given this terrific view looking towards Hwy. 17 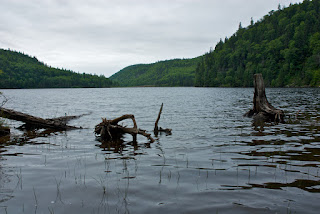 This end of the lake was definitely the “high end” beach strip. 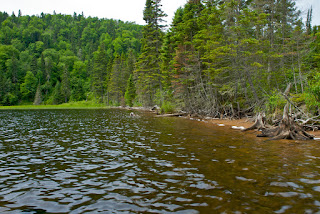 This end of the lake has a little turn in it and you only hear the sounds of the wind as we paddled in some more reeds. 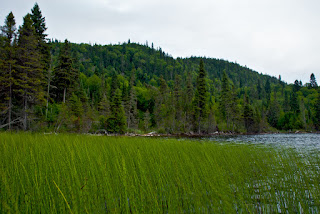 As you paddle south, along the west shore, the cliffs rise right out of the lake. 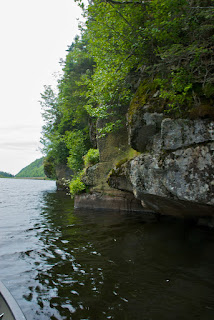 It is beautifully rugged and it feels you are being watched from the hills. 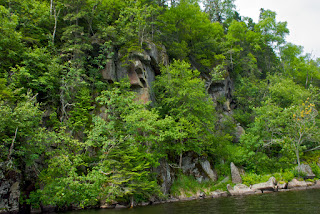 Looking at the eastern hills and shore. 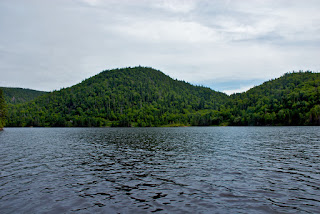 Another small stream enters the lake towards the south end. 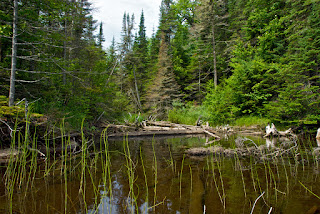 Looking north from the southwest shore. 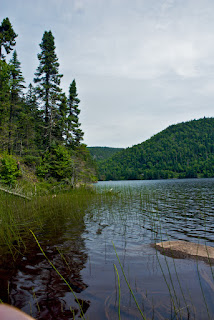 I hope you enjoyed paddling around this pretty little lake with us.

So what did I find?
A beautiful peaceful place to paddle on one of Northern Ontario’s Boreal lakes.
What did I expect to happen?
That I don’t know, in the beginning there was just whisper in the back of my head that I should paddle there, but there where no visions or secret messages.
There was though a great sense of peace and relaxation, but that I have felt whenever I paddle and camp.
So maybe that is the message to share what I have found so others and also find these wonderful places.
Wolf Camp Lake, if you go here or any other special place to you, make sure you leave it for others as you found it.