Into the fall Part II

Into the Fall Part II

In part one I wrote of “Waiting 5 minutes for the weather to change” and how truly how unpredictable the weather can be, especially if you have to plan your trips almost a year in advance.
This year’s choice of the week of October 4th to 11th was full of possibilities, full moon fall colours and a lunar eclipse.  It was the same week chosen as the last 3 years which where all exceptional weather wise.  Well, this year the Big Lake showed who was in charge of the area. 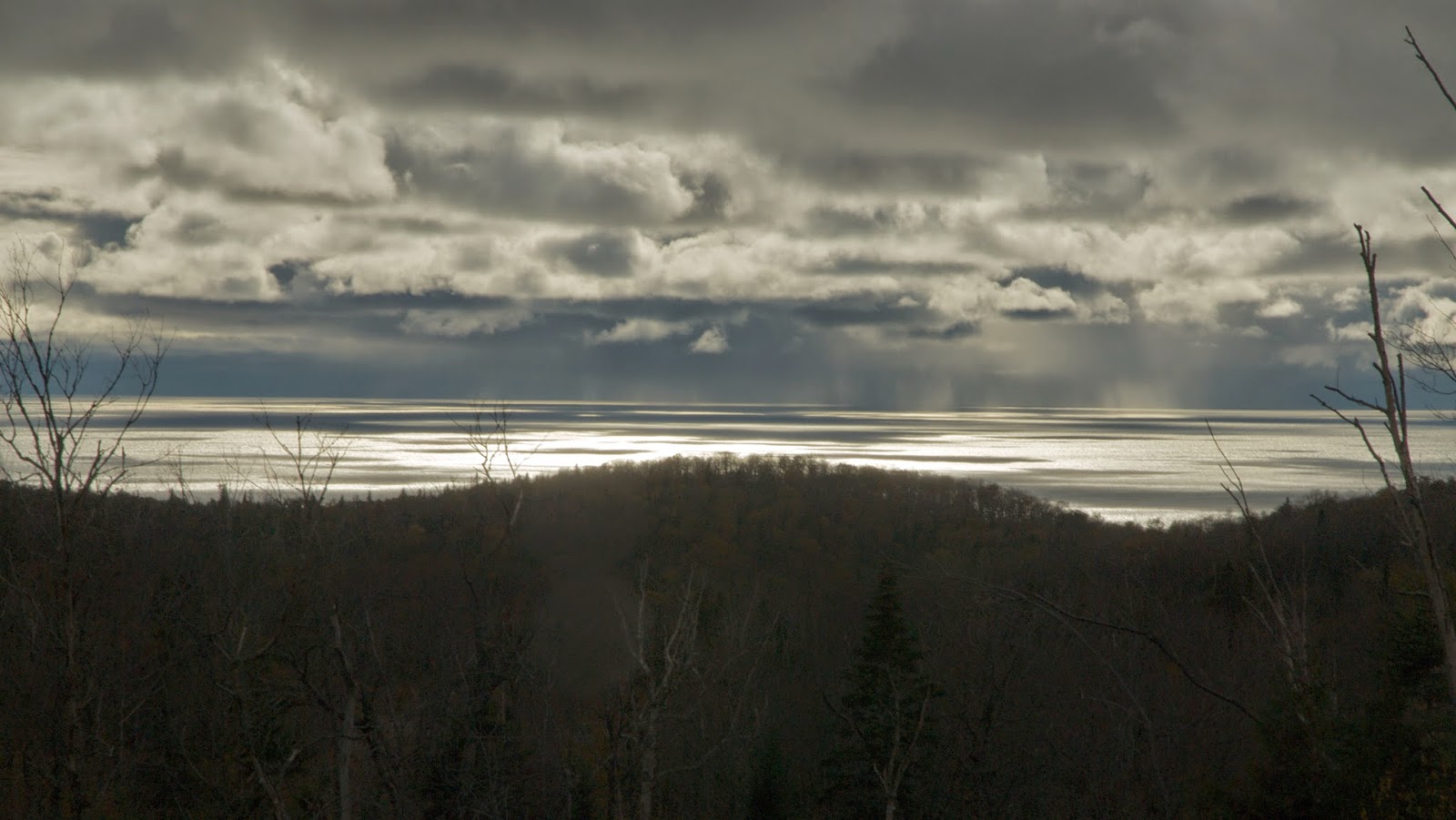 Usually I am just hoping for enough rain to raise the river levels a bit so you can get down with some “Bump and Grind” but the rains brought the levels up more than 1 metre from what I usually run.
I had a rookie wilderness tripper with me, and the high river levels where just not safe to take him down on a canoe trip.  I will post a link to our trip at the bottom so you can follow our adventure.
The storms of November came early to Gitchigumi this year and photo opportunities still abound, the difference is with the speed of the weather systems and the more “challenging” conditions you as a photographer have to be and get ready much faster.
One of the benefits of the high water is that all the hidden small streams with waterfalls in the Algoma Highlands become beautiful cascades that demand that you stop and enjoy them. What is normally passed by becomes a scene that is painted with water. 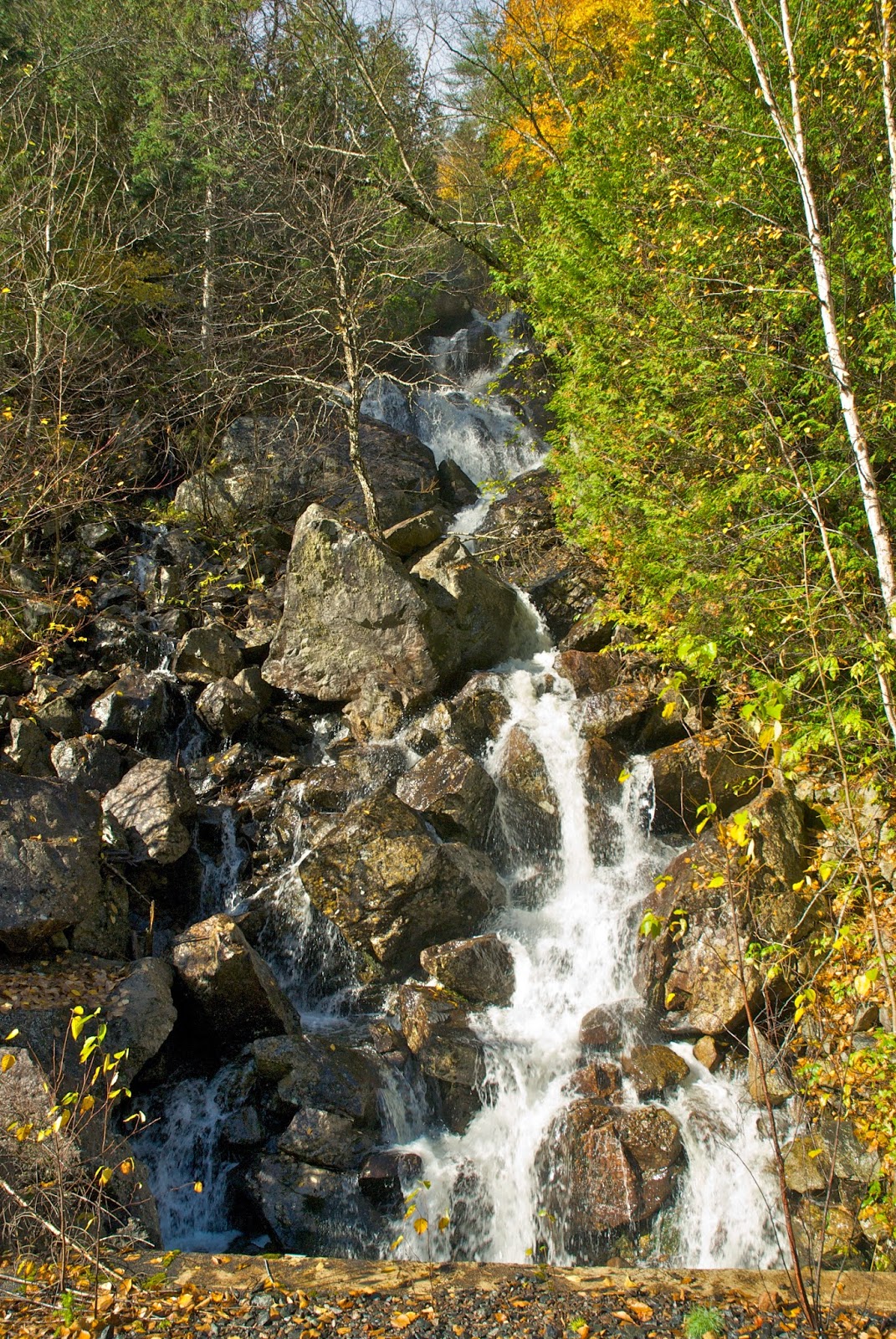 Some scenes show the power of water unleashed.  This shot of where Eleven Mile Creek meets the Agawa River; it is as if the water is being ejected from the top of the canyon walls. 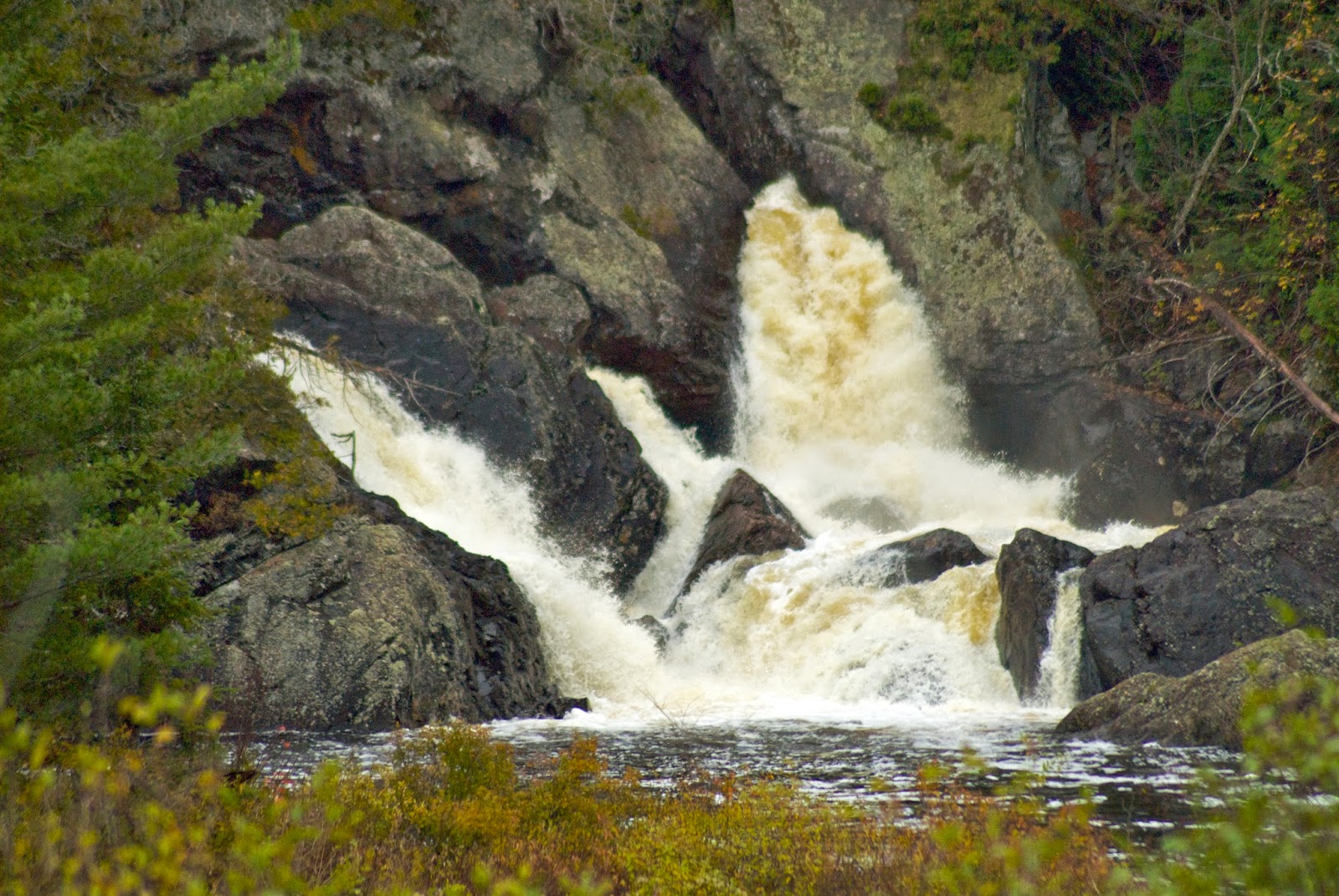 Other better known falls take on a different appearance such as this shot of South Black Beaver falls.  The colour in the leaves, ground vegetation, and rocks is really brought out by a recent rain/snow squall.  It gives the falls a very “soft” look, but also lets you know that the temperature is very cool. 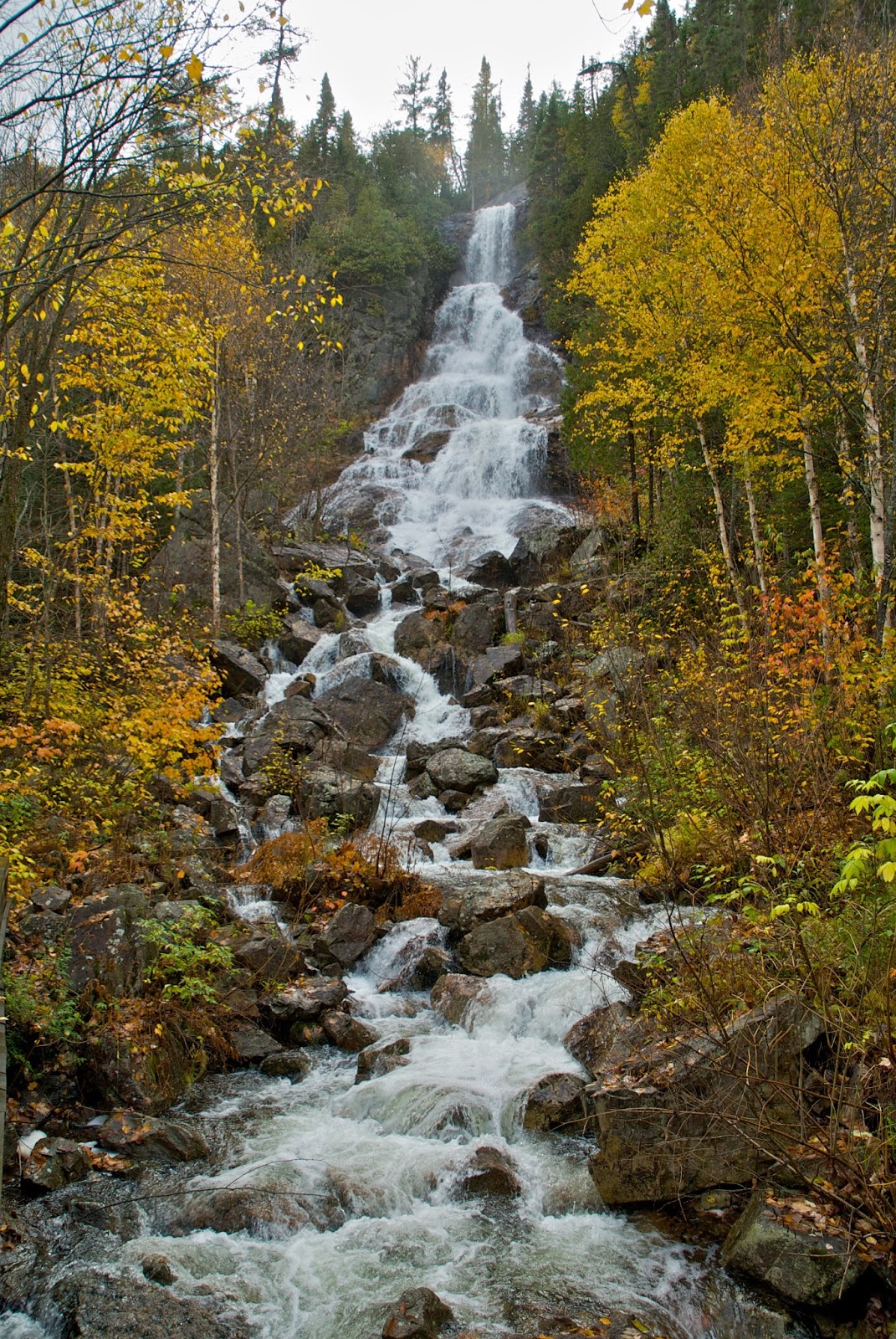 As for landscape shots you have to be a lot luckier to get conditions that will really showoff the terrain of the area.  Sometimes it’s hard to get the whole scene into your frame with what your eyes see.  Too much of one background colour, be it either clear sky or clouds.  In this image from the observation platform at Canyon Station Park it all comes together to show the beauty and depth of the Canyon. 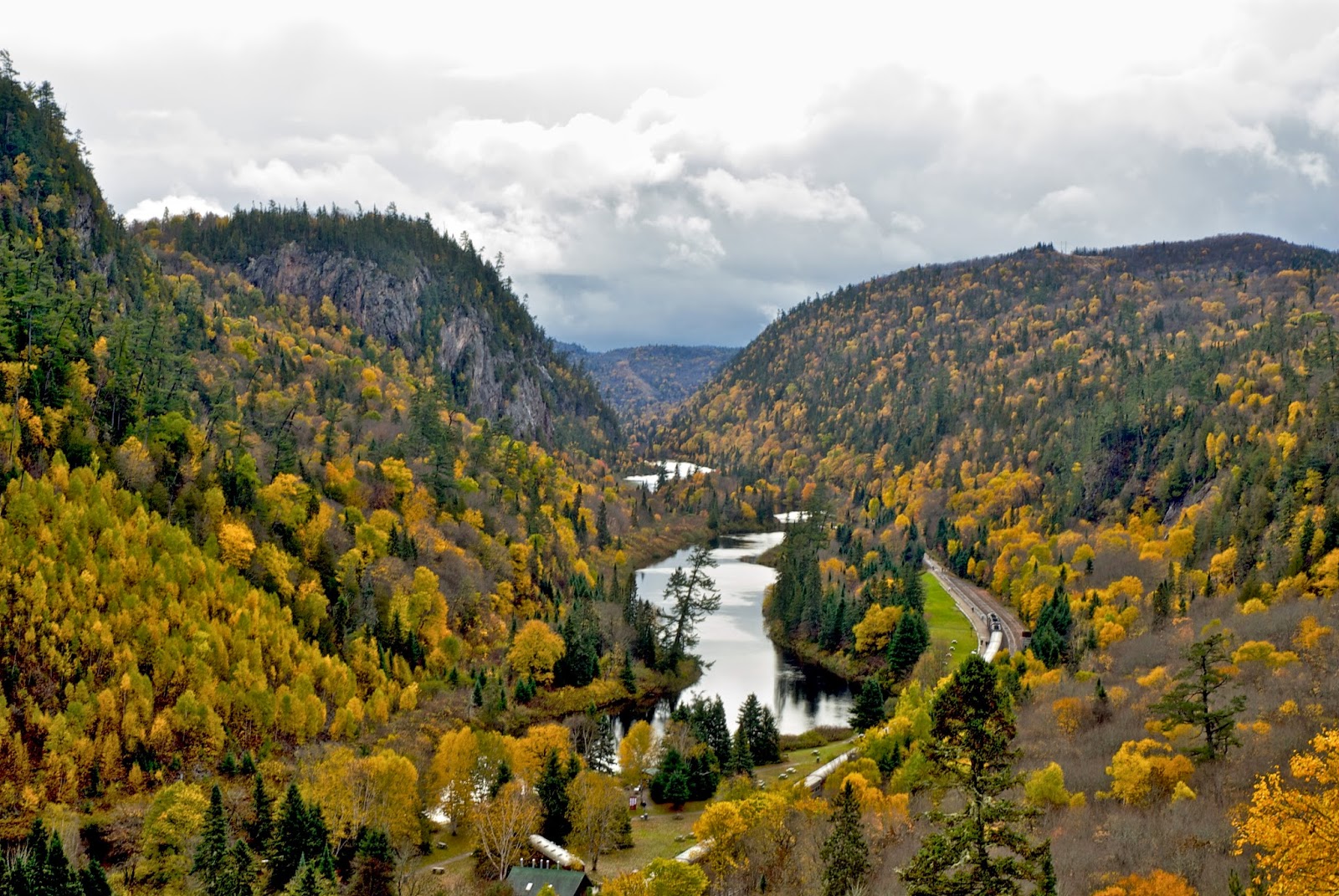 When you are hanging out in a specific area you know what you want to shoot, it then becomes a matter what will the weather bring.  Some of the previous shots are good others are just ok, and a mental note to come back and try another day.  In the base camp scenario you can get that chance of getting that special shot.  I knew I wanted to get the ACR Passenger train in the A.Y Jackson painting location.  This is a spot I have always climbed up too, even before I knew it was a G7 location.  Ever since I first came to the Canyon, no matter what the conditions I have always sat there for a while, just absorbing the view. (It is the background image for this blog)
Link to the A.Y. Jackson painting. 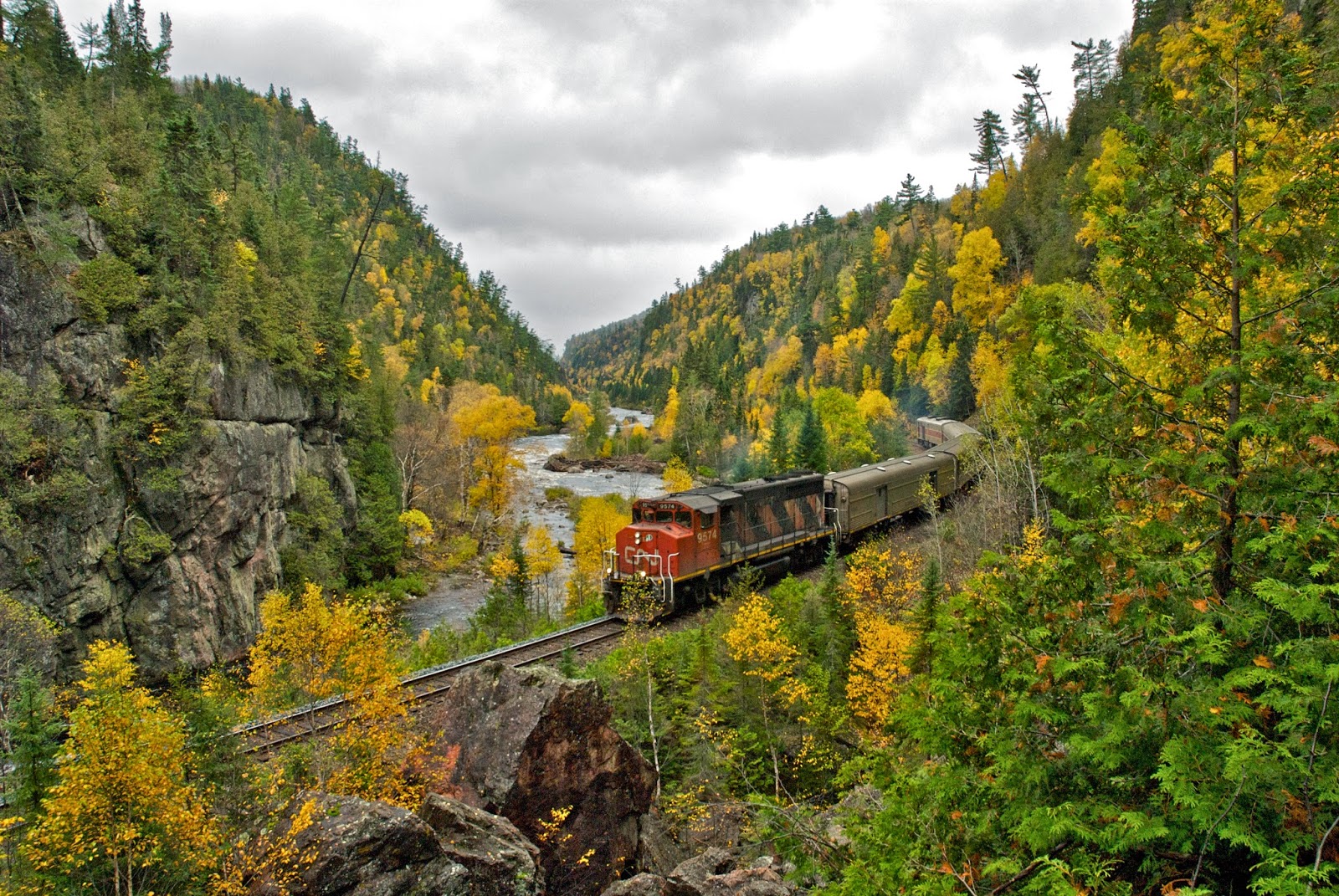 I had nothing better to do, no place to go, (which is sort of an oxymoronic  statement when you love being out in the wilderness )  and we where in between squalls, I was having a snack just enjoying the view after the train went by when on of those magic moments happened.  A little hole opened in the clouds and let some light beams in to the canyon.  Just so you know I shoot in raw, I will sharpen, or take some shadows out, reduce highlights, I do not like to over process or process 3 or 4 shots to into one image.  What you see in the image is what I see, and if you go there and encounter similar conditions you will see it too! And this was one of those wow moments; just complete eye candy when Mother Nature shows you her best. 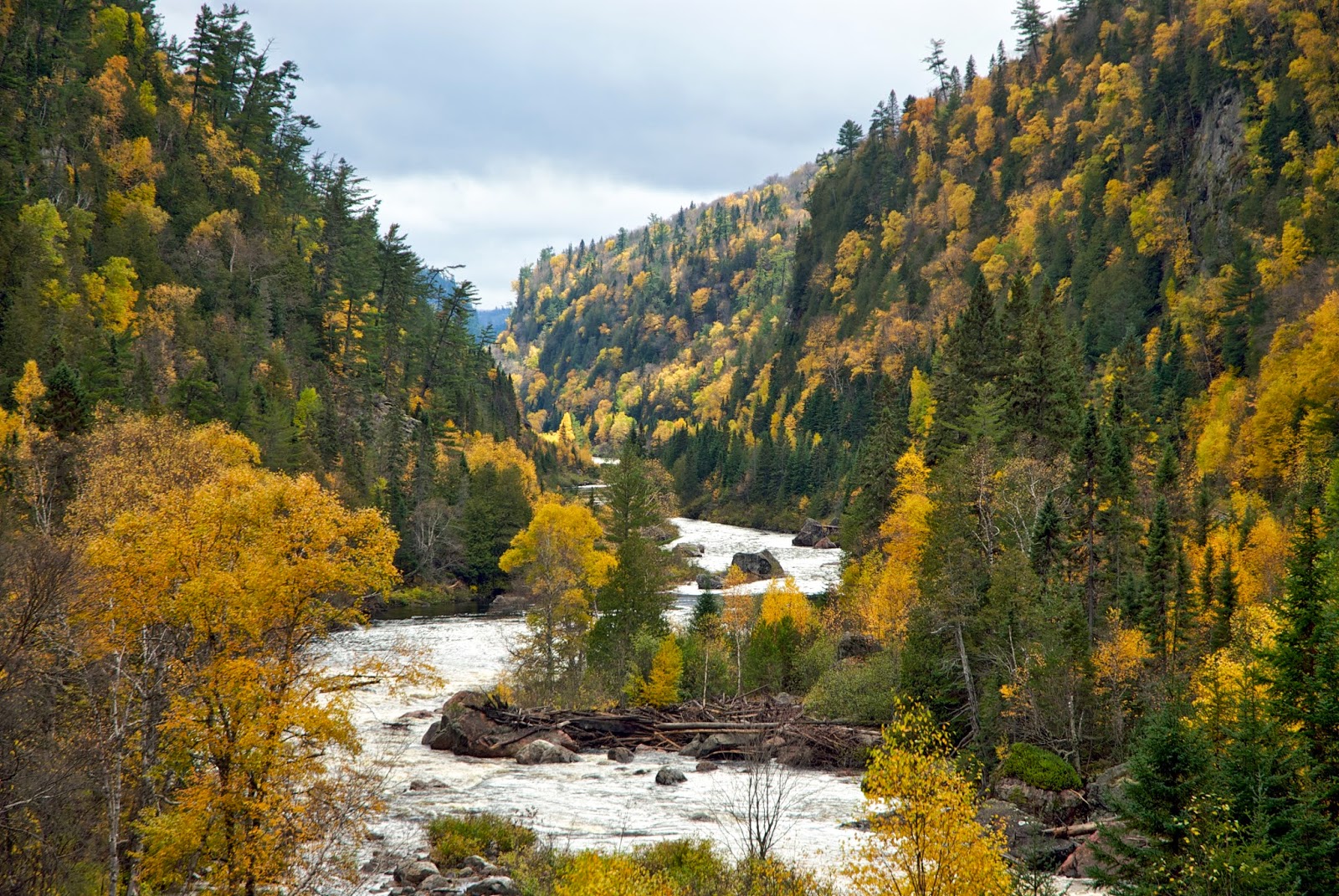 On our last day while waiting for the train to take us back out, we where again given a glimpse of fall beauty when a few more sun beams broke into the canyon. 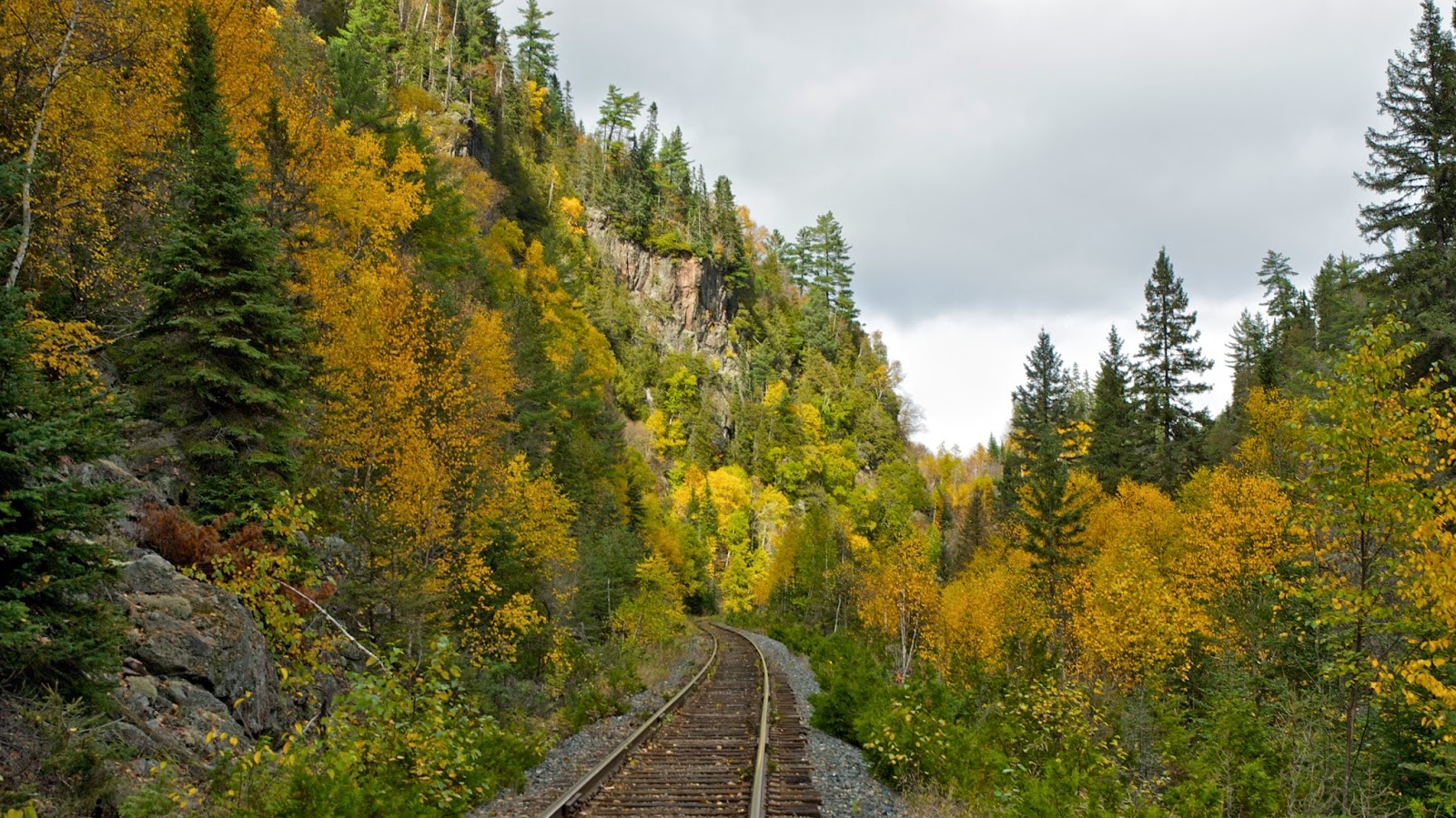 We thought that was it for photo opportunities for the trip we got showered and a fire going for our last night in Lake Superior Park at the Agawa Bay campground when one of the famous Agawa Bay sunsets started to happen.  A thin sunbeam of light started illuminating the Montreal Harbour Point to the south of us and then to slowly proceed moving north to our location. 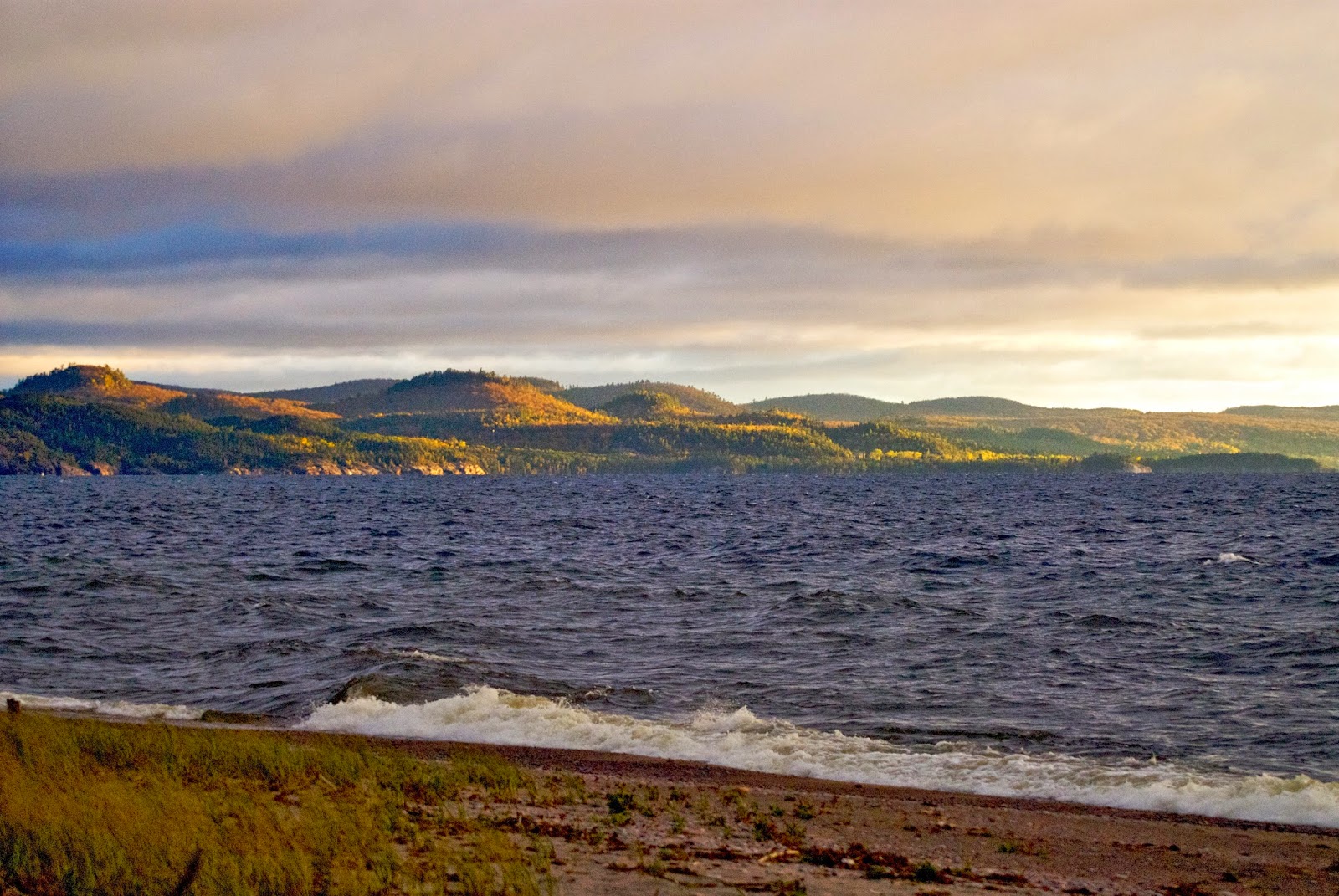 What made this one truly spectacular was the colour the sun was projecting on to the hills along the shore.  Even though many of the maples where now bare, it really showed off what kind of trees grow at what elevation on the hills and where the heavy frosts first hit. 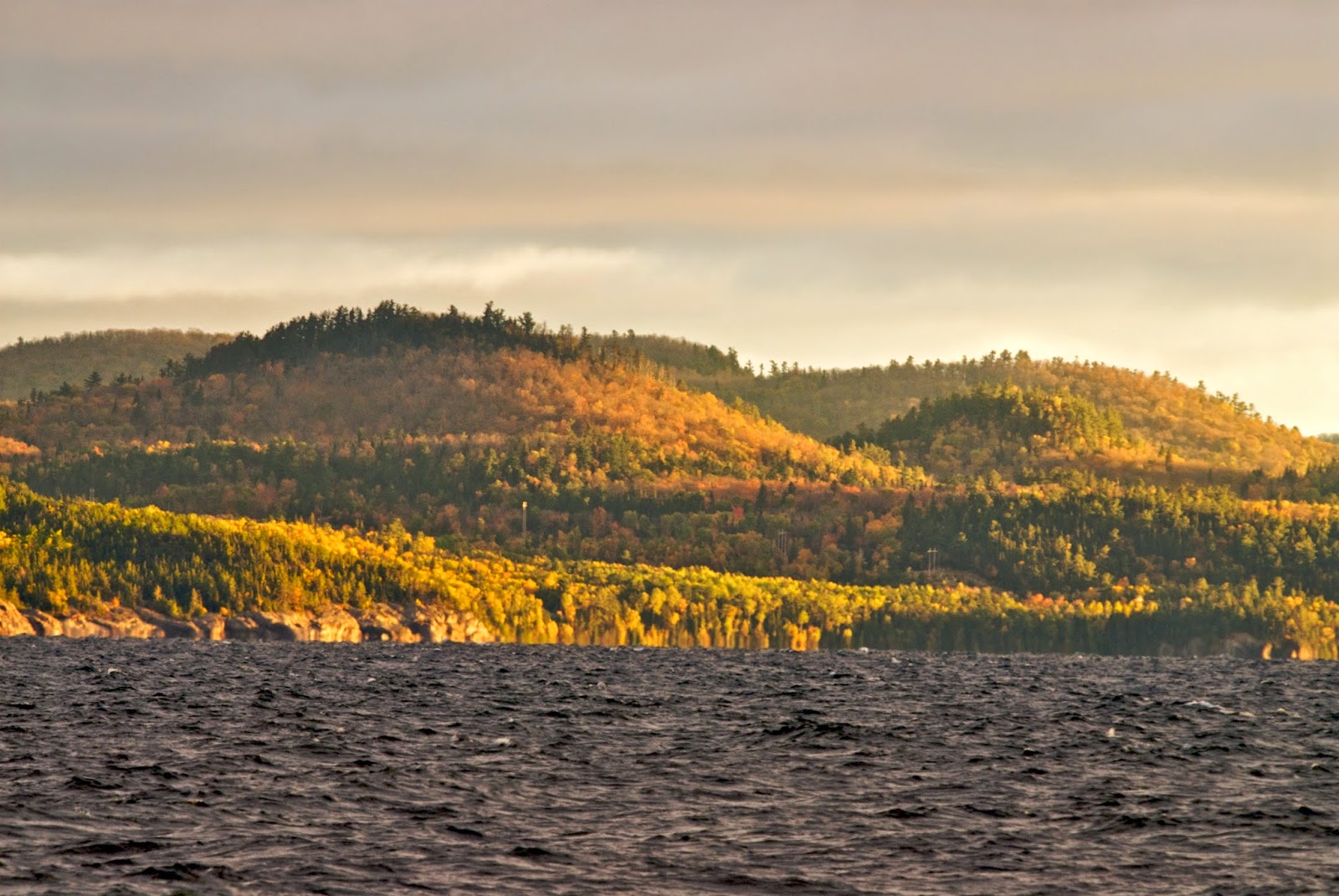 As the sun beam moved north and got lower in the horizon a beautiful gold hue was cast along Agawa Bay. 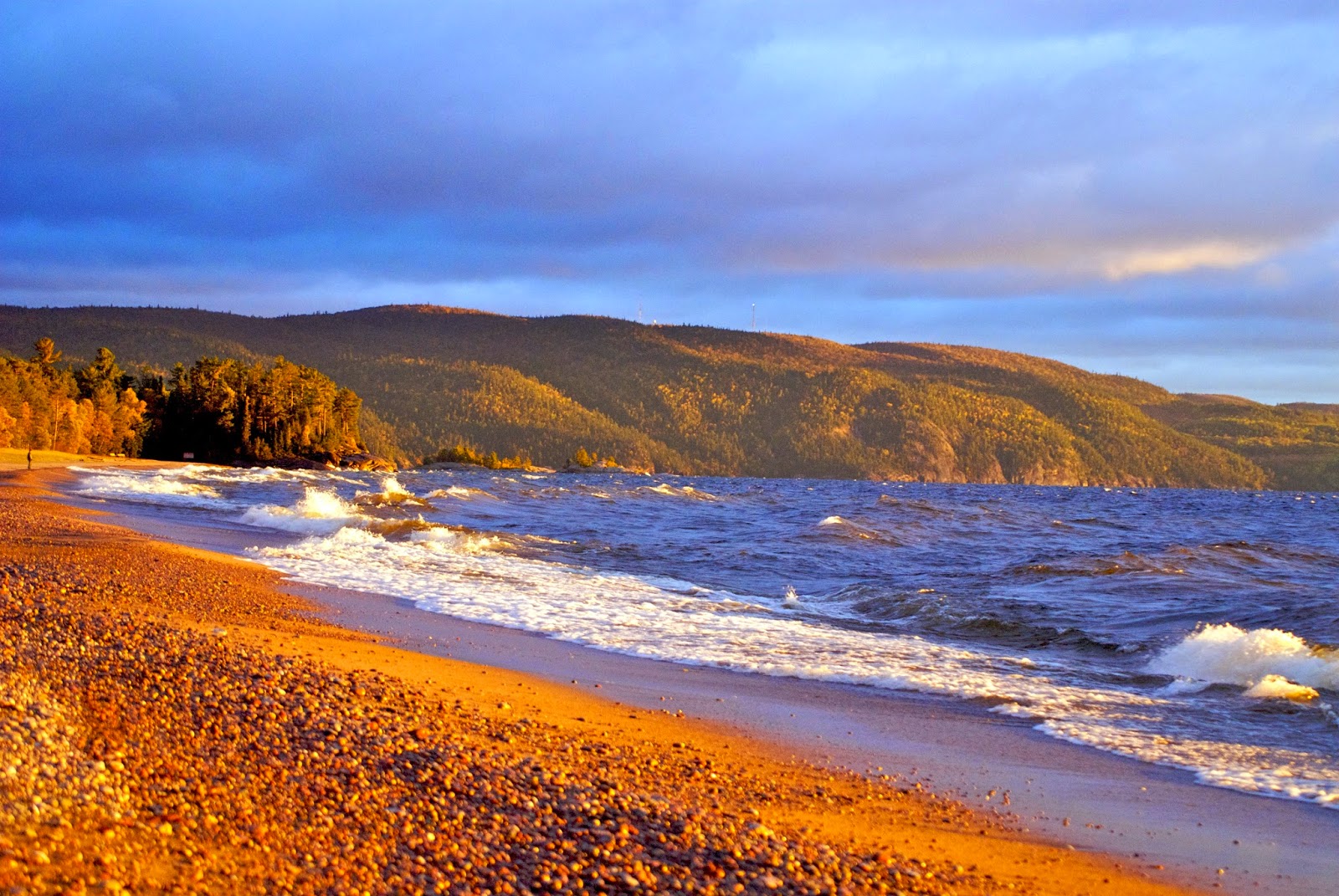 I was so intent on shooting to the south I almost missed a great natural phenomenon.  My wife pointed out that there was something different between the Agawa Islands and the mainland point where the pictographs are; it was a mirage, most likely the islands that are in that direction approximately kms. from where we where. 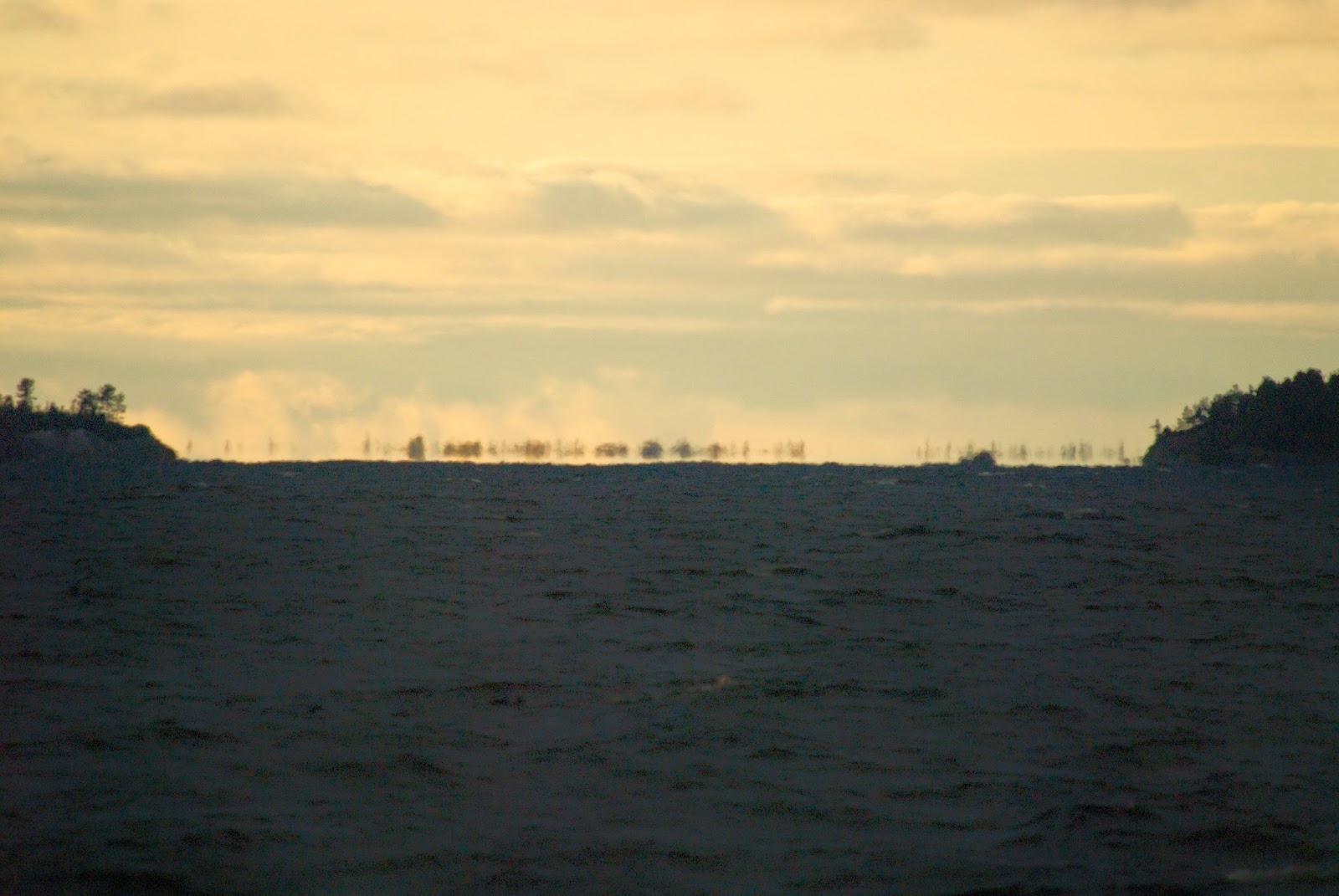 We now know how mirages work but did this effect have any influence on their drawing on Agawa Rock. 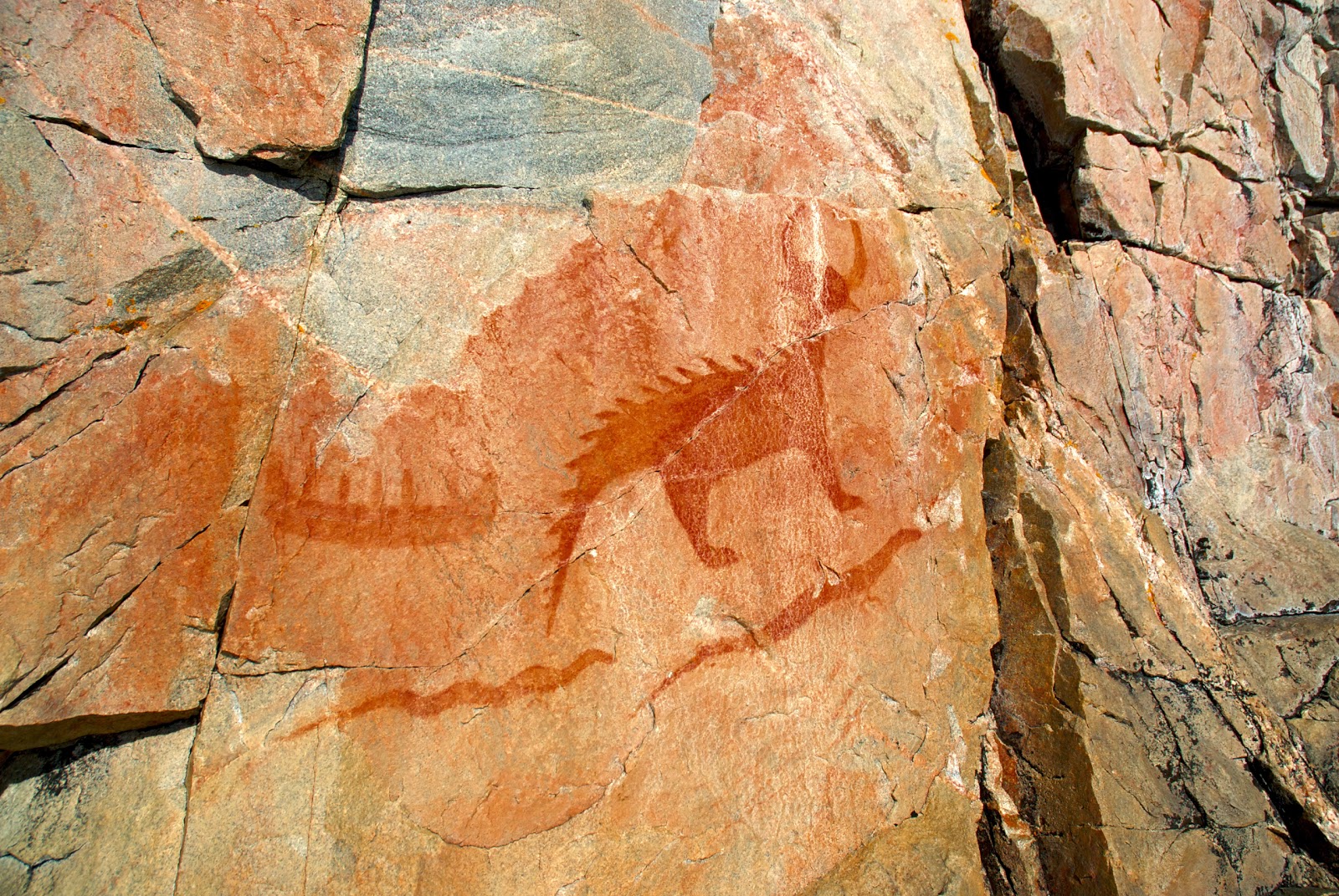 The few people that where on the beach that evening where all golden, even the White Pines along the beach where golden.  To have  the area painted in such an amazing way just left you in awe. 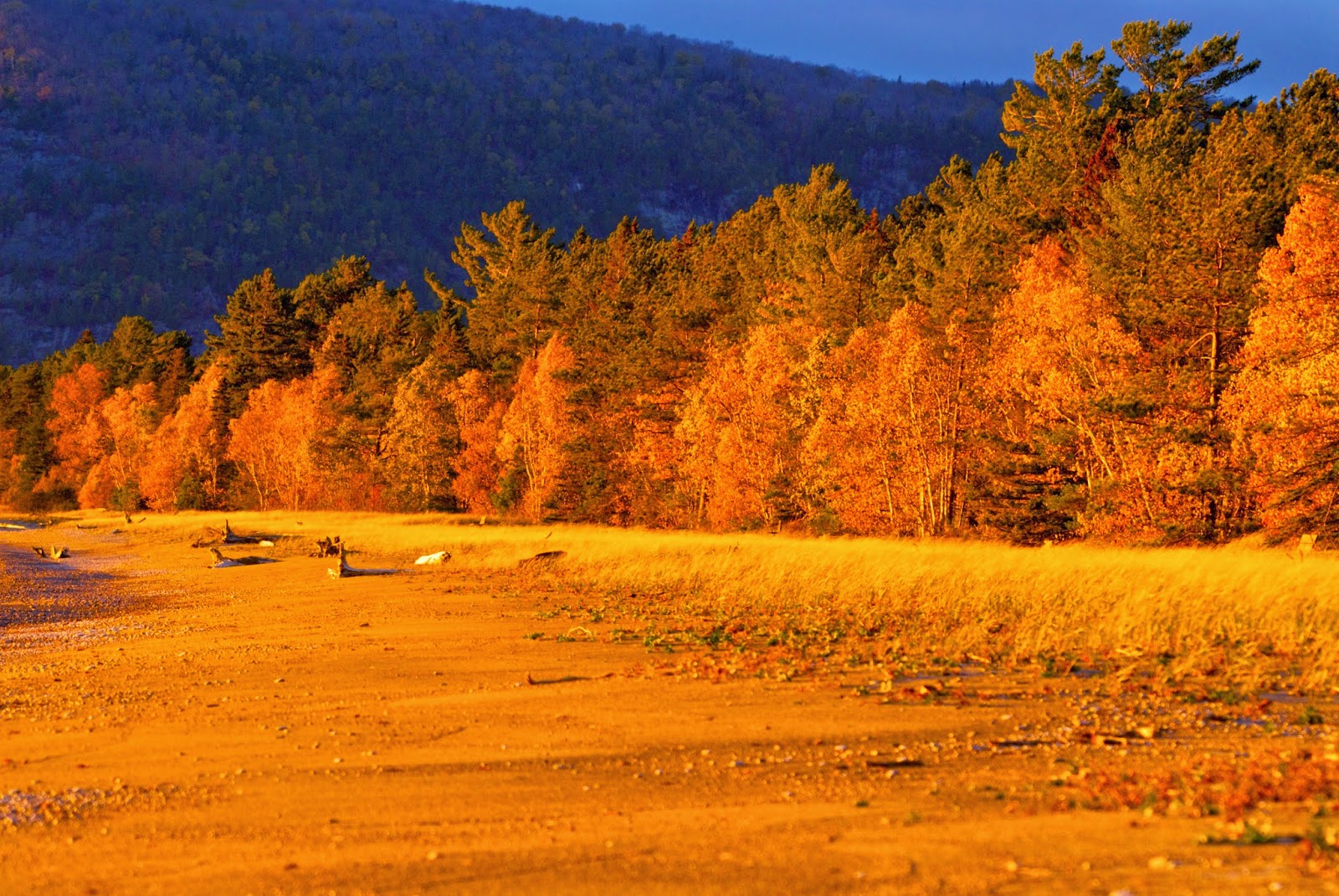 There was a lot of “ifs” on this trip, if any of these didn’t happen, I would have missed out on some spectacular shots.  What if the river did not rise to flood levels?  What if the first train we where to take in on the Saturday was not cancelled?  What if we decided not to go or bail early on the trip?  Any one change in what we did and we would have missed it all.
When you experience such beautiful phenomena and landscapes in this area you have to wonder if the spirits of the area had anything to do with what transpiried.
I am beginning to think they are watching!